With our headquarters in Ridderkerk and in Cooperation with our parent companies TB-Shipyards and DMOE, we can proudly say the we offer Dutch Quality build products.
On top of that we are capable of supporting our customers through our networks and partner workshops in The USA, Canada, UAE, Paraguay, Turkey  and the Netherlands.
A trully worl-class dutch engineering solution in combatting oil pollution, made available anywhere in the world.

We are constantly developing new technology to im prove our models of sweepingarms for better results and shorter response times in case of an emergency.
Koseq is also a member of the spill Response Group Holland, an organization that is committed to the environment and the technology that is needed to protect it.

Apart from sweepingarms, mobile spill recovery units and multi-purpose craft, Koseq can supply complete spill containers, different sizes of Oil-booms on reels and other needs directly from and in co-operation with  our first Class suppliers around the world.

With a complete package of services, equipment and after sales services, we can have a wider market approach and a wider range of products to increase our added value to our Customers.

Over forty years ago Koseq started in the oil recovery market by developing the rigid sweeping arm. It was, and still is, a different solution than most other stationary equipment.

The increased transport of oil in the 1960s and 70s led to some major incidents where large amounts of oil polluted waters and coasts. These incidents, and the lack of proper equipment to recover spilled oil, lead to the start the development of the rigid sweeping arm. The goal was to produce a reliable and effective tool, capable of removing large quantities of oil at sea under severe circumstances. In cooperation with Rijkswaterstaat (the Dutch Ministry of Transport, Public Works and Water Management) and T.N.O.(Dutch Organization for Applied Scientific Research) the rigid sweeping arm was developed over forty years ago.

First named Doseq and later known as Koseq, sweeping arm systems were built and delivered to the coast guards of the Netherlands, Germany, Spain, Turkey, EMSA, and US response and salvage companies including international dredging companies and local authorities. Some of these systems are permanently installed on vessels, other systems are mobile units, stored ashore and ready for immediate use by appointed and dedicated oil recovery vessels.

Over the years, the Koseq Rigid Sweeping Arm Systems were successfully used to recover many large and small oil spills. These arms are able to perform in harsh sea conditions and have proven reliability and efficiency during oil recovery operations such as disasters with the Prestige, Sea Empress, Erika, Gulf War, Gulf of Mexico and others.

INVENTION OF THE SWEEPING ARM 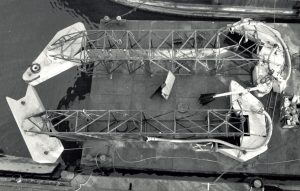 In 1972 the first sweeping arm was developed by the Dutch Coast Guard (Rijkswaterstaat).

Koseq was first known as DOSEQ (Dutch Oil Spill Equipment). It was later changed to KOSEQ

Koseq was involved in the Erika oil spill cleanup on December of 1999. Erika was a Maltese tanker loaded with 30,000 t0ns of heavy fuel oil. It broke up into two parts in bad weather and sank 40 miles off the Brittany coast. The OSRV “Arca”,  which has Koseq sweeping arms, recovered 630 m3.

KOSEQ IN THE PRESTIGE OIL SPILL

On 13 November 2002, near the Spanish Coast, the tanker Prestige began listing in bad weather and leaking oil. Eventually the ship broke in 2 pieces and sank to the seabed, into a water depth of 3000 meters.

The ship was carrying 76,972 tonnes of IFO 650 heavy fuel oil, of which an estimated 63.000 tonnes was spilled. The incident caused one of the largest environmental disasters in Europe of the last decades.

A total of 12 oil spill recovery vessels from across Europe contributed in recovering the oil. Most of the vessels were equipped with a boom and skimmer system, which meant they had to contain the oil first. It appeared that on the open sea in severe weather, containing the oil was almost possible. Three vessels however were equipped with Koseq sweeping arms and were able recover a significant amount of oil: from the total amount of oil recovered by oil spill response vessels, over 82% was done by the sweeping arm equipped vessels.

A report about the oil spill and the clean-up results can be found in the European Maritime Safety Agency (EMSA) report “Action plan for oil pollution preparedness and response” which can be found here: http://www.emsa.europa.eu/technical-ppr/download/420/486/23.html 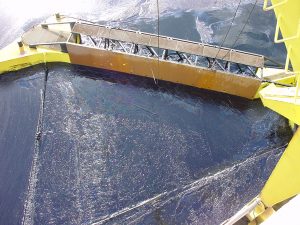 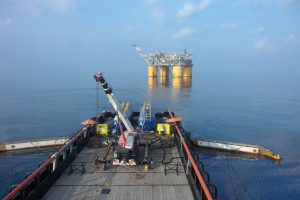 On 20 April 2010, the Deepwater Horizon oil rig in the Gulf of Mexico exploded and sank, causing one of the most catastrophic environmental disasters in recent history. The total spilled volume was estimated at 4.9 million barrels, spread over a period of 87 days.
At first, six Koseq sweeping arms were sent over to by plane to help recover the oil, with more to follow later. In total 22 Koseq sweeping arms were sent to the Gulf. 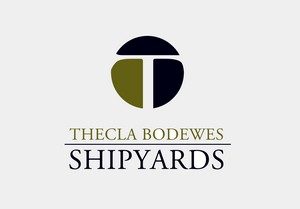 In 2013 Koseq became part of the Thecla Bodewes Shipyards Group and moved in 2014 to a new office in Ridderkerk. Continuous improvement of our existing equipment and new equipment is our contribution to strengthening the industry and reducing the effects of maritime pollution for a cleaner environment. 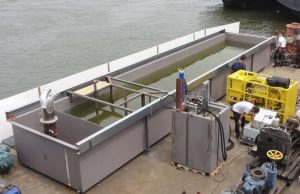 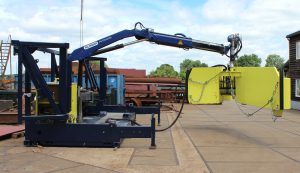 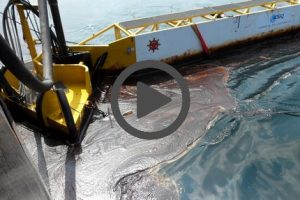 Weir Deployment at Gulf of Mexico.